Both the (1) seeds are gone, defeated soundly in their Final Four games. This clears the way for a matchup maybe no one (except Pam Houston in her analysis of the Final Four games) saw coming: (7) Tracy Chapman, a huge underdog in the Sadness tournament, will face off against "dead guy legacy" (according to Rick Moody) Jeff Buckley in the championship on Wednesday. Wow.

As it turned out, neither game was even particularly close. Both Chapman and Buckley led from the first shot (a Chapman layup and a Buckley deep three coming off a screen) to the last, and neither The Cure nor Joy Division ever even got close from that point on. We don't know if the wider voting spoke to the more limited (or generational?) appeal of the two UK bands. Your votes for the Final Four came from mostly America, but also: the UK, France, Germany, South Korea, Italy, and Poland. It appears that with The Church eliminated, the Aussies felt less strongly about these pairings.

While it's tricky to generalize from only two games, it would appear that we prefer our sadnesses—at this point anyhow—solo and American.

So the final will be a (7) seed versus a (2) seed, an original versus a cover, one living artist and one dead one, each with big reputations, but each being known best for only one or two songs. Each have blown up brackets in their march to the tournament final, and you'll get to decide which one cuts down the nets and takes home the trophy tomorrow morning, Wednesday, 3/30/16, right here. See you there. (We also have a brief interlude post coming your way shortly to tide you over until then.) 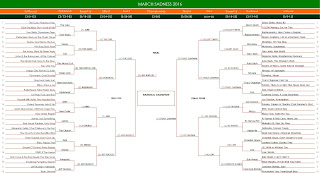