I had no idea Jules' song was a cover of a Tears for Fears hit until several years after I'd heard it in Donnie Darko. I looked up the original, and I don't think I've done so since. There's no need. It doesn't have the pull that Jules' version does. And by pull, I mean, well, the sadness. But also its clarity. This is a pretty spare tune. It's not hard to follow. There's a big wet whallop in here that's aimed right at your gut.

These days an artistic representation of suicidal ideation is a big turn-off. I get a little frustrated. This is ground that's been covered before. I know my thought is dismissive, and I'm kind of self-conscious about that dismissal. I kind of want to lecture the artist on reaching their full potential in other more constructive ways. "You've got a lot of talent, and you shouldn't squander it on moping." That sort of thing. But that's me today, as a grown-up. In 2002 or 2003, when I probably heard the song, memories of my own adolescent rage and despair weren't so distant. Let's say I was introduced to the song in 2003: that's 13 years ago. In the past thirteen years I've done a lot of stuff. In 2003, I'd been out of high school for only eight years. I'd been out of college for only three or four, depending on how you count. And that passel of years wasn't easy. There was plenty of sadness, and plenty of leaning on the edges of rooftops, looking at one city or another, feeling almost surgically removed from everything below and beyond.

I may even have spent some of those rooftop moments in a hat like Gary Jules wears in this video. The landscape he looks over is pretty bleak and wintery. There's a lot of separation there. Not a lot of "there" there. It's familiar.

Today I see a young parent with a young child and I smile. Same happens when I see a dog. If I were to gaze over the rooftops of my city, I'd think about the neat cars on the streets, maybe how the landscape was different before they put in the interstate. (In fact I'm certain I'd think about the changed landscape. I've become deeply enamored of historical plat maps.) I'd think about the weird politics that have led to the football stadium I can see being built downtown. In short, I often think of things other than me, because I feel connected to them. In all sorts of ways. Today I'm luckier and happier than I've ever been. I'm engaged to a singularly kind and beautiful woman. I've come out on the other end of a couple pretty serious illnesses. I've got friends and I'm well employed. I'm not alone.

But Gary Jules reminds me that sadness is a thick filter I know well. How he got Michel Gondry, whose film credits include Eternal Sunshine of the Spotless Mind and that weird White Stripes video where they're made of Legos, to direct a video for his perfect song I don't know, but Gondry gets what he's talking about. When Gondry gets it, you know you're on to something.

Ryan Carter is a research librarian for a large global firm, and lives in Minneapolis.

On tumblr the meme below is being shared furiously by teenagers experiencing heartbreak (100,000+ reblogs/likes as of December 2015), and most of them do not know who Elliot Smith is or where these lyrics come from or what they are associated with. They do not know he is dead. They do not know his music. These teenagers care about this image because, almost twenty years later, these lyrics embody ultimate sadness, loss, the impossibility of unrequited love, an infinity of closed off possibility—I’m never going to know you now—and even through the impossibility, a challenge of the heart—but I’m going to love you anyhow. 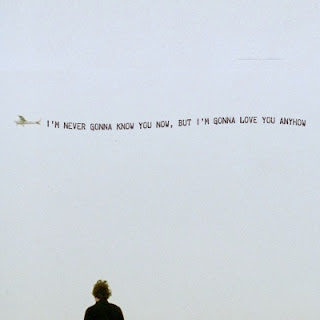 
What are the ways in which we know and love each other, even for brief moments of time? How do we ever relieve ourselves of the grief and burden of relationships, especially our earliest ones, the ones that shape who we are and what we carry with us? If thinking of "Waltz #2 (XO)" in this way, this is the saddest song of 1998* (especially as this song was in the world with songs like this and this and this that year). "Waltz #2 (XO)" is a song about childhood trauma, but it is also a song about suffering and love, longing and turmoil, as all Smith’s songs are, and the relentless mantra of being a failure and receiving such a message as early as the earliest years of life: you’re no good you’re no good you’re no good / can’t you tell that its well understood? This is a love song to his family, his harsh stepfather and the undying love of his mother. This song offers an articulation to these complicated feelings and a chance to ruminate on the suffering that shapes us all in these ways and that shaped the haunted and exhausted Smith as an adult: I’m here and expected to stay on and on and on / I’m tired, I’m tired.

On October 21st, 2003 the news of Smith’s death trickled in slowly to the Michigan woods where my friends and I were binge drinking PBR and chain-smoking Newport 100s. Elliott Smith was one particular friend’s favorite artist and when we heard the news he told us a story about meeting Smith earlier in 2002. Supposedly Smith was clean then, but there are conflicting reports. My friend told us about giving Smith a handmade acoustic guitar created by my friend and his father, and how Smith was so humble upon receiving it, as if no one had ever given him a gift before. He mused with my friend about how the world was a strange place without heroin. He played the guitar in the show. My friend wept while telling us this story, and we all stayed up all night with him while he played Elliott Smith covers and recorded them, playing his guitar and bawling through songs. He must have played "Waltz #2 (XO)" for us 20 times by morning, and by morning my friend had deleted all the recordings in a rage as grief is apt to do. Here are the ways in which we love each other, even for brief moments. Here is how we relieve our grief.

I’m never going to know you now / but I’m going to love you anyhow. 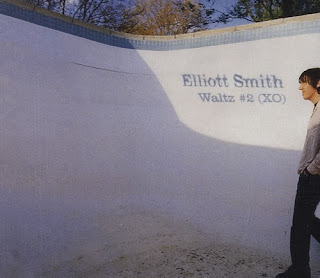 *Or, arguably, the saddest song of all time, and possibly Smith’s best song. In Torment Saint: The Life of Elliott Smith by William Todd Schultz, he argues that "Waltz #2 (XO)" is Smith’s best, most tortured song (see here in Slate in 2013).

Katie Jean Shinkle is the author of two books, most recently The Arson People (Civil Coping Mechanisms, 2015). You can learn more about her work here.