Whoa, exciting stuff: so, first, scores:
We're not surprised by any of these scores, actually. Nirvana was always a weak three seed, here by legacy rather than recent record, and Kate Bush has been surprising, and might go deep. For instance:

"This Womans Work" is the saddest of them all. If it don't win trust me there will be riots outside #MarchSadness HQ https://t.co/9dJWdmqxYk
— Brad Efford (@effordbp) March 16, 2016

Though we doubt the riot-prone-ness of Kate Bush fans, she's shown up to this tournament so far (as have, generally speaking, almost the women). We thought the Morrissey/Jules game would have been closer just on account of the love for the Moz, but the correct song advanced in our view. We're sad to see The Eels go, but we think they were overseeded in retrospect, maybe even too malaised to play, and were outmatched by a final four contender in Tracy Chapman. And the Replacements made a great 11-2 run very late against Elliott Smith, but in the end his particular misery was too much to overcome. Tough one for the Replacements. Either of those we could have seen winning it all. Well. On to the sweet 16 for them. On Tuesday, 3/22, Elliott Smith will play Gary Jules and Kate Bush will face off against Tracy Chapman.

So today we have more hard choices for you: we have (1) JOY DIVISION against (9) MAZZY STAR, our marquee game of the day, which we expect may just return a surprise given the very early minutes. We'll see. Then the lowest remaining seed (14) LOW goes head-to-head with (6) CROWDED HOUSE. We've got a strange pair in (4) ALPHAVILLE vs (5) PJ HARVEY & NICK CAVE, and our final game is (7) BOB MOULD squared off with (2) CONCRETE BLONDE. This committee member is rooting (and voting) for JD, Low, Alphaville, and Concrete Blonde, but fears for the first three's futures in the tournament. 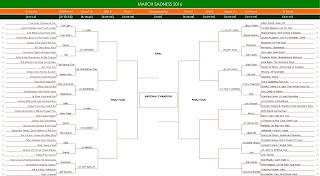