The close game between a possibly-overseeded (1) Neutral Milk Hotel and a surging (13) The Church came down to the final moments, but NMH squeaked a victory, 54-49, and advances to the Elite 8 where they'll meet (2) Jeff Buckley, who stomped (3) Sinead O'Connor 73-35 in a lopsided contest.

Close call for surprising tournament contender The Church, and had a couple calls gone their way at the end NMH could be packing their bags. But Jeff Mangum & co go on to play another day, ice their legs, rest up, and celebrate how far they've come.

Sinead's tournament is over, probably unsurprisingly, where she ran into the voice of Jeff Buckley. Man, that was a contest of spectacular voices, but you chose Buckley. One voter contacted us to inform us that her first kiss took place against a background of Buckley's "Hallelujah": damn, quite a song for that, we think! Well-played, and that's a great reason for a vote. We've been reading Ben Ratliff's Every Song Ever, and he's got a bit that describes nicely what happens sometimes in a great song when “some singers…go transparent in their voice. They seem to become the property of other forces.” That's what we think happens in both those songs, and so we're sorry to big goodbye to Ms O'Connor. Next year, next year...

So the Elite 8 teams is all the one and two seeds so far: (1) The Cure vs (2) Radiohead and (1) Neutral Milk Hotel vs (2) Jeff Buckley. Today's matchups are going to be sweet too, and will ensure that at least one lower seed advances. We have (7) Tracy Chapman vs (6) Kate Bush and (1) Elliott Smith vs (4) Gary Jules.

Added bonus: In the first game, Chapman is introduced by Manuel Muñoz and Kate Bush is ushered in via Danielle Cadena Deulen. And in the second game we have Katie Jean Shinkle repping Elliott Smith and Ryan Carter repping Gary Jules. Come for the games, but enjoy the lovely essaying while you're here.

Also, guest analysts for the Final Four will include Rick Moody and Pam Houston. Rock on. More to come on that.

Vote & comment & spread the word about the March Sadness action: we're getting closer to knowing who the real contenders are. & here's your updated bracket: 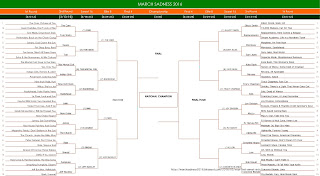