The first round is in the books, and the next four days will feature four second round games a day. 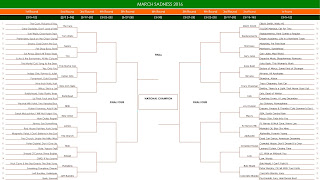 Analysis: as we expected, the scores were lower over the weekend since folks aren't as easily misled from the work tasks with obsessive projects like this one. That's okay, since most of these games weren't particularly close. We expect scores to be a little higher into the second round since word is spreading about #marchsadness and the games get a whole lot harder here.

A word about the tournament format: today through Wednesday we'll play the second round games, and the game posts will focus mostly on the matchups. You can read our original coverage (see the archive at the bottom of the page) for more in-depth discussions of the bands and songs. As always, votes on a matchup are open for 24 hours. Vote here on the blog posts or if you're on twitter, via @angermonsoon's feed. Comments on the posts are always welcome or on Twitter, facebook, whatever.

Looks like a few folks are writing articles about March Sadness. Awesome. Also do you like our score ticker? We do.

Tomorrow we'll see (1) Neutral Milk Hotel vs (9) New Order, (5) James vs (13) The Church, (11) Ride vs (3) Sinead O'Connor, and (10) Smashing Pumpkins vs (2) Jeff Buckley. Interesting that there were zero upsets in the the northwest region (playing today), but many lower seeds playing into tomorrow in the southwest. See you then.
Posted by Ander at 12:04 PM