The Final Four is decided

Good games finishing up this morning, with one surprising outcome, being that (7) Tracy Chapman's "Fast Car" upset (1) Elliott Smith's "Waltz #2" 85-69. This was a huge game, with a huge result, sending Chapman onto the Final Four, where she will play (1) Joy Division. Smith is the second 1-seed to fall, after Jeff Buckley took down Neutral Milk Hotel yesterday to punch their own ticket to the Final Four. The Committee was divided on their predictions for this game, and rightly so. The voting was close, with Smith and Chapman trading leads until Chapman went up by 7 just before halftime. Elliott Smith never tied it back up, and his run at the sadness cup ends here.

(14) Low, fresh off their huge upset over (2) Concrete Blonde on Wednesday, came into this game a little flat, but their traveling fans—best in the tournament in our estimation—got them into it. With a strong wind at their back, they got hot and hit shot after shot, and were leading at one point by more than 12, most of the votes coming from the Twitter poll (as you know, to make it as easy as possible for everyone to vote, we aggregate the Twitter poll with the blog voting). But shortly before halftime, Joy Division shifted into the zone defense, and that seemed to stymie Low, who looked gassed after playing with such little rest between games. JD took the lead and kept it, though Low made run after run to get back into it. JD ended up with a double-digit win, 74-60, and it looks like Low grew out of the glass slipper. That score's misleading: this was a hard-fought, tough game from buzzer to buzzer. Brilliant season and a very deep run by Low. The fans should be proud of their effort, losing to what might very possibly be an unbeatable Joy Division team that we think we'll see in the final and maybe cutting down the nets after it. 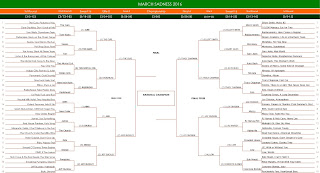 So the Final Four is set: on Monday morning we'll see (1) Joy Division against (7) Tracy Chapman and (2) Jeff Buckley versus (1) The Cure. Our guest analysts will be here to offer their takes and analytics then. We have only three games left in March Sadness. Though your team may have been sent home and your bracket busted, there's still time to choose another hero to back in the last few days. Final Four games are Monday, finishing 9am Tuesday morning. The Sadness Championship is Wednesday. See you there.
Posted by Ander at 1:23 PM