Starting tomorrow, we have the first set of first-round matchups here for your consideration (and voting on them begins at 9am 3/5 and goes until 9am 3/6), all taken from the NW region: 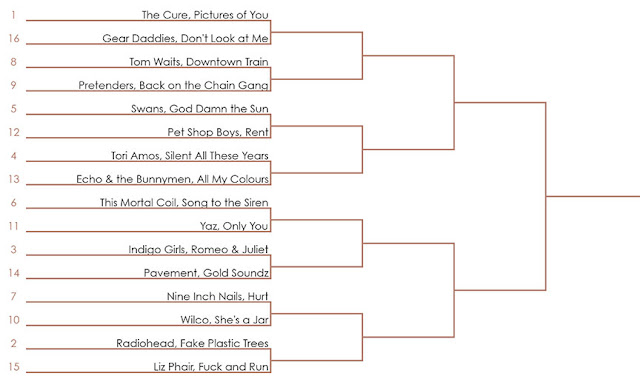 We expect the Radiohead-Phair game to be a whole lot closer than the seeds would suggest. Conventional wisdom has it that the Cure shouldn't have too much trouble with the Gear Daddies, but we'll see how the Cure, one of the obvious favorites coming in, really looks. Gear Daddies could be a surprise for most people who haven't ever seen them play, since they're rarely televised nationally. A big group of Minnesotans could swing the voting in their favor for an unprecedented 16 seed upsetting a 1 seed.

Swans and Pet Shop Boys are a tough one to call, since both songs are, we think, in the resigned depression portion of the sadness spectrum, and both are outsider groups playing in their first tournament. Nine Inch Nails vs Wilco features bands you know pretty well, probably, but this game is where we'll start to see what we mean, exactly, by "sad," since their playing styles are so radically different. Check back tomorrow morning for the matchup posts and voting. Predictions?
Posted by Ander at 9:19 AM