The Joy Division/Mazzy Star game was tied with eight minutes left to go. Three minutes later, JD went up two coming off what—let's be honest—was a moving screen that should have been called. Hope Sandoval lost her cool for a minute: you could see the betrayal written on her face. It shocked us that Mazzy Star was even in this game at all, though it shouldn't have, obviously, since they took down a way-underseeded REM in the first round. Plus, we consulted Ben Ratliff, New York Times music critic & author of Every Song Ever: Twenty Ways to Listen in an Age of Musical Plenty, with our bracket yesterday, and he picked Mazzy to win it all. So clearly there was something we weren't seeing, and boy, did they bring it in this game.

With a minute left, Mazzy Star, down three, fouled Joy Division. Bassist Peter Hook made one of two free throws, somehow got his own rebound, got fouled again, this time with an elbow to the face in the scrum, and, after he got patched up made two more, putting the game nearly out of reach barring something crazy. Sandoval got the ball and launched a half-court three to get within a pair, but it missed, and this outstanding and surprising matchup was unfortunately over.

Whoo—an electrifying finish, complicated a bit to watch because we run, as always, two polls, one on @angermonsoon's twitter and the main one on the game post here on the blog. So it takes a little doing to add it up, as Violent Femmes would remind us, or they would if they hadn't already lost badly in the first round. 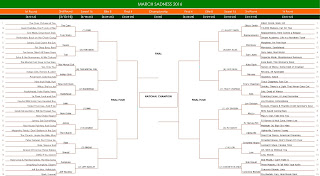 Analysis: we still can't believe the JD/Mazzy tilt was as good as it was. Either that bodes ill for a depleted Joy Division going up against PJ Harvey & Nick Cave or else that game should be easy by comparison. Unsure which. We suspect Mazzy Star was simply a much better team than anyone could have guessed coming into March.

Concrete Blonde won a laugher against Bob Mould. Alphaville, with 110 million youtube views of their one big song, went down to the weird electricity of PJ Harvey & Nick Cave. And big tournament underdog Low continued their improbable run against a difficult Crowded House.

So we take the day off to rest & recuperate today (though expect a brief analytical follow-up later today). The Sweet Sixteen begins Friday and continues into next week with the following schedule:

See you back here tomorrow morning for the next round.