Here we are under the big lights, with one game left in March Sadness 2016. Bittersweet? You bet. In lieu of more writing, we've made a video (next) to helpfully recap our monthlong road. After that, the songs in question, followed by one last trip to the expert analysts' panel of getting-it-wrong and coulda been. Vote by tomorrow morning at 9am, at which point we'll announce the champion.

HOW WE GOT HERE: 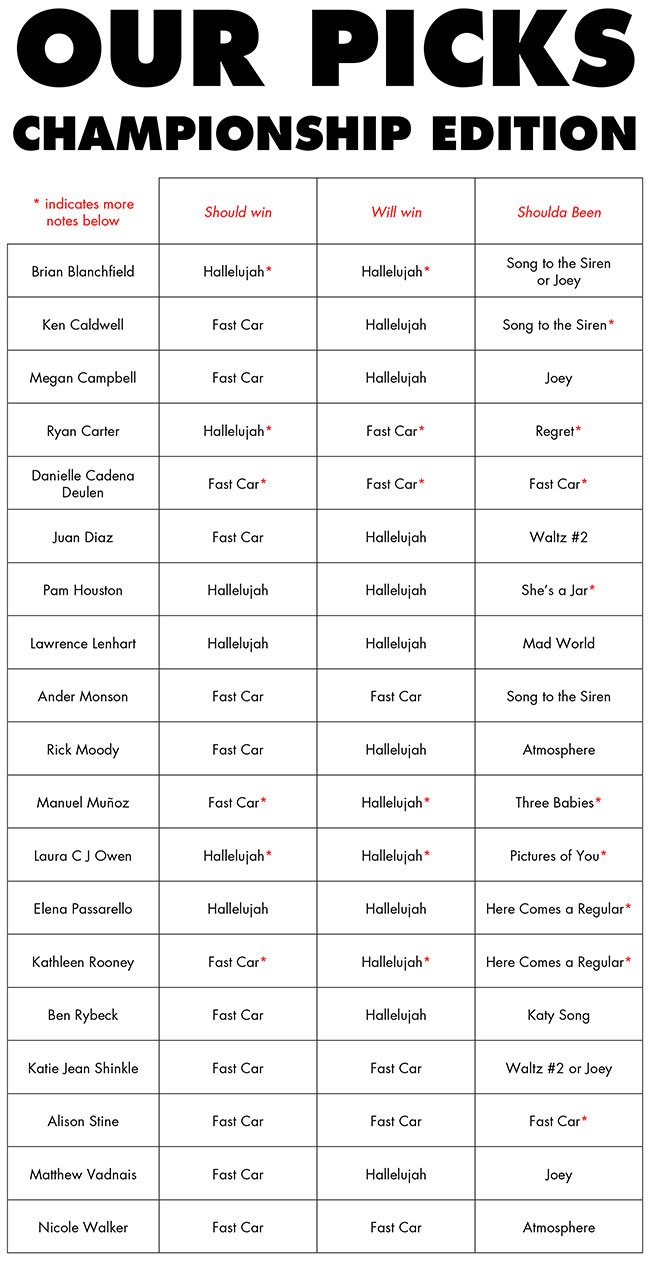 KC: *This Mortal Coil's “Song to the Siren” will be somehow etched into my gravestone.

RC: *Should win: Buckley. That recording is for the ages. Chapman's song never hung together for me—too slick. *Will win: Probably Chapman. The perfection that rubs me the wrong way about her song makes it extremely accessible, and it's had global impact, and very positive. *Shoulda been: New Order, Regret. I like a sad song that makes me dance. Also regret itself is a very uncommon sentiment to find so well expressed in art.

DCD: *My pick to sweep the whole thing from the very beginning was Chapman. It's the damned saddest song for so many reasons beyond my own personal experience, but I have a deep connection to that particular song on top of it being a heartbreaker.

PH: *Pam thinks Via Chicago and Ashes of American Flags are sadder, but she loves the way Jeff Tweedy sings/writes.

LL: *Since the Syracuse upset, #4 seeds have become more attractive to me. Also, between the original and cover, you've got just about the whole span in question (1983-2001)—maybe overemphasizing the "college years" over the sadness. Also, still think NMH has got what it takes.

MM: *Should win: Chapman, because it acknowledges the power of a big one-hit wonder to define an artist and then opens the mystery of why we enthusiastically respond to that artist's first endeavor, only to go so cold on the rest of their output. (Yes, I know she had that other song years later, but please...). Also, I think Buckley was up for the wrong song. I would have gone with "Lover, You Should've Come Over," but I think anything is genius if it features someone looking out of a window or a door. *Will win: Buckley, because those who know of his tragic circumstances also know that his dad died early too. If people want deep sadness, there it is. It's like Bruce and Brandon Lee. *Shoulda been: as a dutiful follower of the brackets, I listened to each song against its competitor and tried to judge fairly on those first merits rather than on reputation or what I remembered of the song. Sinead's song was the only one that knocked me on my ass and I could not get it out of my head for the rest of the day—the barely contained heights of emotion in her delivery were real surprises, exactly the kind of song that best represents "heard it, but don't really remember it." Wrenching, honest, and punished unfairly for not being "Nothing Compares 2 U." Bonus points for perhaps not being the third or even fourth song that a casual listener might list if asked to name her best work. Quoth Pam of Archer fame, "Holy shit snacks..."

LCJO: *Should win: I love the love Chapman's been getting—a surprise surge. I think in part because of the quality of the write-ups she's been getting, but also on the strength of the song. It's cool that something that's more quietly regretful as opposed to flash-y sad has come so far. But I still think that both in quality of song, transcendence of cover, and sheer range of evocative sadness, it's Buckley. *Will win: I would be SHOCKED if he doesn't win. *Shoulda been: My write-in candidate, The Magnetic Fields, All the Umbrellas in London, and of the real picks, The Cure, Pictures of You (which did go far!). There's something arguably peaceful and reflective about Hallelujah while as Kathleen Rooney brilliantly put it, Pictures of You is pure melodrama; in the best possible sense, it's fabulously, wonderfully self-indulgently sad. Should have taken it.

EP: *(But if it was a winner, would it still be a Replacements song? Discuss.)

KR: *(I think "Fast Car" is sadder because of its fearless evocation of the soul-destroying drudgery of privation and economic coercion by invisible / systemic forces, but I don't know if people will be able to separate the narrative of Jeff Buckley's short, not-especially-buoyant life from what's actually intrinsic to the song and the performance (although he also deserves points for making a not-super-sad song sadder than it is).

AS: *Because I once saw a drag queen perform that song while just sitting on a folding chair and just singing it and people were coming up out of the crowd and stuffing dollar bills in her overalls, weeping. So sad.

MV: *Should win: because no song used on The O.C. twice should qualify for this award. *Will win: Buckley because the The O.C. made lots of otherwise good people cry more than twice. *Shoulda because "if you're hurtin', so am I."

Good luck to both of the final songs. Let's have a clean game. That means you, Buckley.