Damn! We expected tight finishes, and we got them. Here's the Radiohead-NIN timeline: 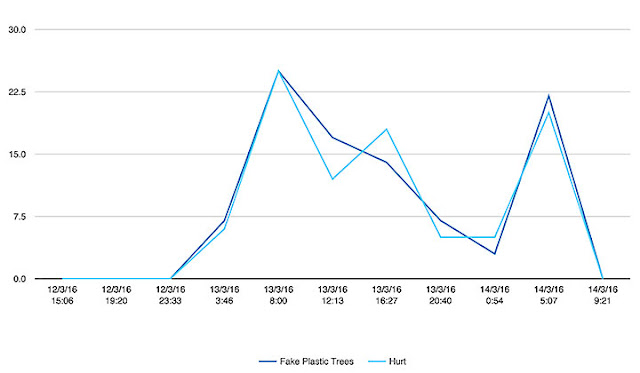 As you can see from the graphic below, the Radiohead-NIN game was tight throughout, with Radiohead leading by a handful almost the entire game, with a couple lead changes in the middle of the night. Radiohead managed to hold on, though, until the buzzer sounded. They go on to play This Mortal Coil in the Sweet Sixteen.

That game was too close to call until the last: guitarist Robin Guthrie's rebound at the buzzer clinched it, giving us the only upset of the day. We expected "Romeo & Juliet" to go, though the committee was divided in its voting. Either way our hearts are sad to see the Indigo Girls out.

Today's matchups offer a greater range than the first day of the second round, since the southwest bracket featured several first round upsets and thus advances a bunch of unexpected teams. First we have a matchup of innocence against experience with (5) James vs (13) The Church, then the balance of (9) New Order vs the wild commitment of (1) Neutral Milk Hotel, bracket-buster (10) Smashing Pumpkins vs the dead master, (2) Jeff Buckley, and last, the abstract (11) Ride vs (3) the intensely personal (3) Sinead O'Connor. Who you got? Who goes home? Who advances?
Posted by Ander at 9:49 AM